Sunday night Zoe was sitting in front of the stove monitoring progress.  “I like to watch them bake,” she had said and flopped down on the hardwood floor. Earlier we had all  (the youngest included) made a deal  – eat the soup I’m gonna (lovingly) make with those straight-from-the-farm veggies we got from the market on Saturday, then we’ll make some chocolate chip cookies. In the land of flaky croissant and picturesque little cakes, it’s still the warm essence of the chocolate chip cookie they are sometimes looking for. After steaming bowls of soup, they were tossing Brittany butter, pepitas du chocolat, sugar onto the counter and hunting for the white flour.

Three girls in the kitchen. We were in need of a ‘coalescing’ moment, I had decided earlier that day as I took the youngest over to the 15th to her friends house, as I (unsuccessfully) tried to persuade the teenager Zoe to go with me to the Street Food festival in the 3rd, as I eventually found myself sitting on the grass alone watching the French families in the Jardin du Laboure on a pitch-perfect autumn afternoon.

Andrew was traveling a lot this fall for business and had flown off 2 days ago, it was the first year of British high school for Zoe,  a new international school for our youngest; we’d recently met a lot of new people, but we had also said goodbye to several families that would be missed. There was a lot going on.

The youngest was saying, “there better be white flour” in the tone she took most days – self-confident and exasperated. At ten, she had honed it to perfection. I was glad I had loosened the nutritional morals a few months back, and there was a bag of ‘regular’ flour. I set it out. They were reminiscing. Zoe was saying, “I remember when Mom made cookies for the school bake sale. She used buckwheat flour. They were brown and nobody bought any.” That made us laugh then gasp in horror. “Did I do that?” I asked them. “Really?”  They were taking turns whisking the big bowl. They nodded their heads in exaggerated unison, like I did that kind of thing every day and how they had suffered. They insisted on licking the spoons, then dipping spoons into the batter, so it was luck there was a pan-full at all to put into the oven.

Zoe was calling from the kitchen floor, “We have a problem here.” I was in front of the washing machine trying to start a load and wasn’t paying any attention. “The cookies are sliding,” she was saying again. I was pouring in detergent. The cookies were sliding? That didn’t make sense. “Sliding?” I  skewed my brow. I went back to the kitchen and bent over the window. The cookies seemed to be hovering over a butter layer, like a car in the rain, hydro-planing toward the oven door. I grabbed the mitts to prevent a pile up, heat escaping as I opened the oven door and tilted the sheet just in time. The cookies went sliding back the other way.

By now, we were all in the kitchen alert to the present danger of cookie avalanches, Zoe kept her post by the oven door. Sure enough we had to do the tilt thing several more times before they appeared to be done. We decided it must have been the missing baking powder that we couldn’t find in Paris, or the variability of the French oven or maybe we’d measured the butter wrong. Something. Whatever it was, it ended with us gathered around the counter over a warm plate, the smell of chocolate as we bit into warm cookies.

“Hmmm. Like cake almost,” I said my mouth full. The girls were chewing. “Yeah…cakies,” Zoe said, her ability to sum things up, “these aren’t cookies, they’re cakies.” We all snickered… cakies, good one. Later that night as I was cleaning up, I couldn’t stop laughing out loud at the image of the cookies vibrating on their plane of butter, slowly sliding together. Le Cakies. 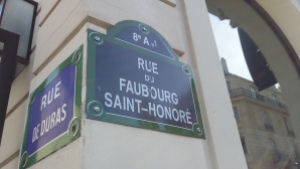 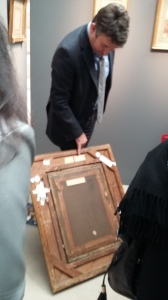 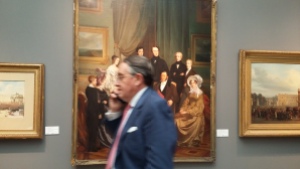 11am on this Monday morning on rue Saint-Honore, I walk into Sotheby’s Paris to view 200 or so  items that belonged to the Count of Paris that will go up for auction next week.

These items were the personal belongings of the last King of France. His name was Louis-Phillipe and in 1848 he lost the French throne and had to leave the country in disguise. He went to live in England, taking his belongings with him.

His descendant, the Count of Paris, Henri d’Orleans, from this dynasty of the House of Bourbon, a one-time pretender to the French throne, his estate is now selling King Louis’ personal things. It’s enough material to make a great TV series. As you might suspect, there are a lot of keepsakes, like paintings of the family and tattered velvet furniture.

But there is more to the story. Apparently, the Count, as descendant of the Bourbons, was once the wealthiest man in France, worth 650 million or so, in castles, forests, decorative treasures, etc. But rumor has it that he squandered much of the inheritance in the casinos of Deauville and Biarritz.

So what remains is lovely and personal, but not splendid. The paintings of the King with his family boating, paintings of the children. King Louis Philipe was known to be a devoted ‘family man.’ And my favorite, the painting of the gentlemen in red coats, their backs turned, looking off toward the Chateau de St. Cloud, one holding a stick to throw for the pup in the foreground. Our dog, Skye, has been to St. Cloud and chased some sticks in the very same forest.

What is left of this grand inheritance of the French kings is being sold to split between the Counts heirs, seemingly, because as the Sotheby’s agent said, “sometimes it’s easier to sell than to share.”

You can see the Sotheby’s agent above pointing out signatures and dates and taking paintings off the wall showing how to determine the age and provenance by the markings on the back of the frames.

Note: All of Sotheby’s auctions are free and open to the public and there is no obligation to bid.

A few weeks ago, one sunny Sunday morning, I popped up from the pillow and exclaimed, “Let’s go to Rambouillet!” No one responded except the dog, who bounded onto the bed and started to lick my face, which is something I try not to encourage so should have known better. If you yell anything with that tone of excitement in your voice, it gets the same reaction from the dog. “Totally in,” you can hear her saying, “Best idea ever. What are we waiting for?” her tail wagging fervently, wag wag wag…

So, the dog was in, but I had to coax the others. Most of us finally agreed and we set out for Rambouillet, a town 50km south with a well-known chateau and grand forest but more importantly, home to the Bergerie Nationale, or France’s National Sheep Farm.

The sheep has a romantic reputation in our culture. It wanders and grazes in clover-filled meadows. Shepards, lonely poetic figures, live in tune with nature tending the flocks. Warm-hearted people take the wool and knit socks and sweaters for cold-natured folks. Nursery rhymes recall our childhood enchantment with little lambs. And border collies with their methods of ‘strong-eying’ straying sheep are clever and cool.

The other day, as I was grazing through my favorite newspaper online, I came across an article about Shepard School. No kidding. In Spain, you can apply to go study and learn the ancient tradition of keeping and tending a flock of sheep at the Catalan school of shepards. The school is getting a lot of applicants.

France’s National Sheep Farm dates back to 1786 when King Louis bought 300 rambouillet sheep from his cousin, King Charles of Spain. This famous breed produced the world’s finest merino wool and were jealously guarded and up until this time, export was forbidden. Present day American rambouillet breeds can trace their ancestry back to the original flock of 1786 from France.

So, in search of sheep, we rented bikes beside the castle and biked thru French formal grounds, thru English wild gardens, then along a dirt road under a canopy of trees to the farm. It was a beautiful ride through old royal hunting grounds.

Sitting out in the countryside, with surrounding fields, the Bergerie is large and not strictly all about sheep. There are lots of barns. Barns with cows, horses, goats, pigs, cats wandering around, chickens, you name it. The day we were there, the sheep barns were a racket. Baa, baa’ing back and forth, back and forth… the chickens outside were clucking at the ducks, the ducks were flapping at the geese… we rolled our eyes, had a good laugh and went in search of snacks.

Care for a club, a class?

Are you busy…? Yeah, me too. Have you just signed all the family up for catapulting or baguette-making classes, decided to join a 6am boot camp, volunteered to host a troop of Girls Scouts or a book club or maybe four book clubs because every member of the family needed a book club. Maybe you yourself joined three book groups  AND a dinner club…. and while you were there, why not throw in a set of medieval history tours at the Louvre. Life is short, let’s try to become better people and learn something.

I was reviewing our lengthy commitment list as I was jogging in the Bois last Friday morning.  Lovely fall day. Big white puffy clouds in the blue sky, runners swiftly passing me, a pack of les pompiers or French fire-fighters congregated around their firetruck. (a benefit of running in the Bois de Boulogne is if you ever, say, trip over a pine-cone, packs of fire-fighters are there to rescue you) I rounded the north side of the lake and ran into someone I knew which doesn’t happen every day. That was fun. But this person, like many you see on the streets, was multi-tasking, jogging while on her phone, so we did that half-wave thing, mouthed, “Hi,” “see you soon” or something like that.

For some reason, seeing my friend made the run seem shorter and I gained speed whereas usually I stop at the mid-point of the lake to walk a minute, but today I kept going. This western side of the lake looks oddly like South Carolina. There is a flat stretch where you see tall pines, the water of the lake and sky. Looking at the sky and trees and thinking of nothing until I got to the south end of the lake, I knew I had to keep the pace not only now, but into these next few months of a full-on rock and roll schedule. It was high performance mode for everyone. Classes, clubs, making communities and forging  connections.