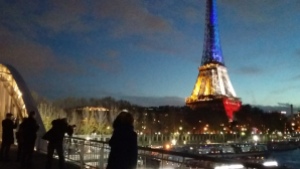 Around 10 am Andrew and I leave the apartment to go run some errands together, the girls as usual preferring to reserve the sanctity of Saturday mornings for reading books, watching cartoons, or rummaging in their rooms. On rue Jean de la Fontaine there is a Marche de Noel, a Christmas market just opening up, vendors still putting decorations on the small white wooden huts, like small chalets that line most other markets across the city. I’m instantly drawn into the lane by the trees and twinkling lights. A wine vendor smiles at us and asks if we’d like to try his Cotes du Rhones. What is a Cotes du Rhones, I shrug, smile, peer ahead to gauge which stalls look interesting, but he is still talking to us, animated in a reserved sort of way, so we’re drawn to his stand, lured by his friendliness, besides it’s just the two of us out enjoying the morning, and Andrew knows wine and likes wine.

Our gentleman says he is the vintner and is handsome in a Richard Burton kind of way, navy jacket, vest, scarf, the trio French men wear in December. He pours and swirls and watches our reactions as we sip from the glass. “C’est bon, oui?” Don’t we agree – it’s nice, isn’t it? I’m unable to grasp the subtleties of a wine, but Andrew nods. I nod too, more because it’s 10am and we’re sipping wine beside a medieval church, smell of spices in the air, music of a carousel in the distance whirling children on colorful tigers. The man is still talking, “We’re lucky. C’est parfait. Some wine. Dinner, a little cheese. Life is beautiful,” he winks and the way he says it, anyone would believe it.

We walk away with a case and an invitation to visit his vineyard.

Four weeks ago, the world turned its eye on Paris, shocked at an attack on the Western world’s capital of art, culture, democracy – Paris. It was a strange experience to read hour-by-hour accounts of events taking place right in the heart of our city. Facebook became a large inventory of newspapers to read. I witnessed the anger and fury on many friends’ posts. It sometimes seemed that the rest of the world might catch the next flight over to France armed and ready to protect us.

The Saturday after the attack, Andrew and I had walked out early to go to the Auteuil open air market to buy fruits and vegetables from the usual stands, to indulge the girls with a parcel of eclairs from the bakery on the walk back. The international newspapers had reported all markets closed that weekend, but it wasn’t the case in every quartier. The city of Paris had suggested people stay close to home while investigations continued. But in our neighborhood the streets were full of people, the market was busy with shoppers and trolleys, children were everywhere.

Researching and reading was my personal reaction to the events, jogging to relieve stress, and pinching pressure points on my hands when riding the metro. The city was tense. You could feel it in the air. Because I must walk by the President’s palace and France’s Dept. of Security every afternoon, I witnessed the armed movements every day, could see when the threat was high alert. Those days, I did not have to elbow my way along rue Faubourg St. Honore. There were no lines at Louboutin, but on the corner at Avenue de Marigny, there were hordes of reporters from all around the world.

The Monday after, I met a big group of American women on a terrace before a tour around the 2nd arrondissement. I could have squeezed them all it was so good to be with so many new-found friends. And we made it a point that week of meeting our friends out, on the terraces, like we normally would. “Je suis en terrace.” The new rallying cry of many Parisians.

And the weeks became particularly busy – a family birthday party, a cocktail party, Andrew had to leave again, this time to Kazakhstan. He sent us stories of elaborate banquets set up as welcome from the local officials and photos from the snowy peaks of the Alatau Zhotasy mountains. Back home, another birthday party, my mom arrived from the states, the climate conference, the marches, the new windmill on the Champs. We ALMOST met President Obama. ALMOST! Then Andrew arrived home again, now we have a Christmas tree up and a new round of cheer begins. We love our home. Peace in Paris. Peace on earth.