The Louvre, over easy. 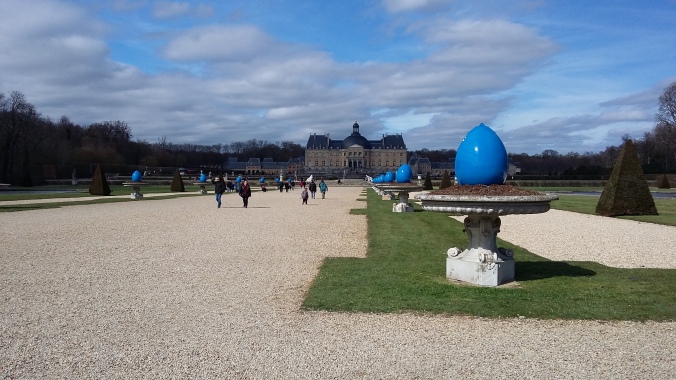 Last Wednesday, I met a group at the Louvre to go see a new exhibition of paintings by Hubert Robert. Yes, his name rhymes, and in his self-portrait, he bears a striking resemblance to the actor Antonio Banderas, but he’s legit. He’s in the National Gallery (in D.C.) after all! At first glance, his paintings didn’t stir the heart. There was no instant love-painter-connection. But given a second glance, you begin to sense the skillful touch. Robert was known as “Robert des ruines” because he had a thing for old ruins. He lived in Rome for a while, so that does make sense. He practiced what is called, “architectural capriccio or caprice” which means that he painted famous monuments in imaginary landscapes. The canvases were filled with grand sweeps of architectural wonders alongside rivers, mountains, and dogs and buxom ladies doing washing. Our guide said that in painting all those ruins, Robert was “portraying the idea that civilizations are in a constant state of change and that from decay, there is re-birth.” I said, from the laundry, came clean clothes, and that too, was a kind of re-birth.

This past weekend we went with friends to the Chateau – Vaux le Viconte to celebrate Easter. There was the grand Chateau. (Built by King Louis XIV’s finance minister. When Louis saw it, he was madly jealous, so he fired his minister, and based on the Vaux chateau- built Versailles!) There were the formal gardens with ornamental shrubs. There were the reflecting lakes and fountains. And the usual out buildings, stables and such. And dozens and dozens of giant blue eggs atop old stone planters. We sat in canvas loungers and ate sandwiches we had picked up from the Monoprix quick stop. Then the kids followed the Easter trail, knocked eggs down the hill with wooden swords, fished in the stream with nets, and spoke of the 3 foot-high chocolate squirrel that one ticket-holder would win. But how would we get it home, we questioned aloud.

The other night at dinner in Monmartre, we went round the table confessing favorite things about the city. What kept us hooked, what was it that balanced out the sometimes plentiful gripes. Somebody was saying they liked that you could wear absolutely anything, a polka dot pantsuit with a flower pot on your head, and Parisians wouldn’t bat an eye. They would only assume you were heading out in requisite attire to that flower-pot event-y thing… she liked the irony of this level of acceptance in an often conforming society. Someone else liked that people spoke their mind. When Parisians didn’t like something, they told you. Outspoken, prone to outbursts, fits of passion, general strikes…! Yes! I said. Only that morning, I witnessed a man on a motorcycle and a man in a car, after nearly colliding, stop their rides, and literally – taking turns – yell at each other at the top of their lungs for what seemed like 20 minutes. It was actually funny. Like a show. Drama, but over.

Now it was somebody else’s turn and they were saying that they appreciated that riding the metro with a 3 foot-high chocolate squirrel was NOT the stuff of legend. But can you imagine, someone else asked, what could really happen. People making a rush for a piece of that squirrel. It could get crazy.